city is a pioneering project for air-source heat pumps to be used in the central heating of the entire city. It is the largest air-source heat pump central heating project in the country and possibly the world! There is one in the main urban area of Zhao city i every few kilometers. A huge equipment group composed of dozens of air source heat pumps neatly arranged. Such a regional energy station can supply heat as low as 200KW and as large as 20,000KW. At present, a total of 44 buildings have been built, scattered in every corner of the county. The difference in this city. 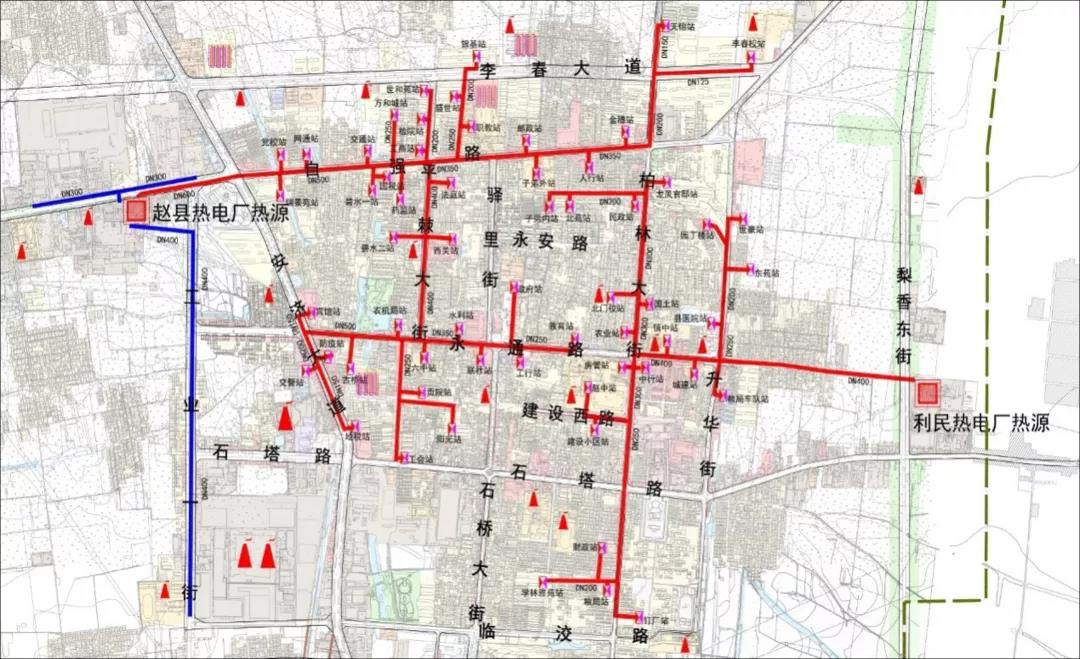 This article will complete the entire process of the large-scale air source heat pump central heating project in Zhao city.
First, Create the "Zhao city Model" and promote the industry to leapfrog to the area of regional concentration. For a long time, air source heat pumps have been widely used in distributed heating where the coverage of central heating is not as good as they are flexible, stable, energy-saving, and environmentally friendly. Extensive verification. But like Zhao city, it is the first time that it can completely replace the combined heat and power, regional boiler room and other forms of central heating.

1.2 Distributed central heating, flexible application Zhao city was originally centrally heated by two thermal power plants, but now 44 regional energy stations provide distributed central heating, greatly shortening the heating radius. 1.3 Large-scale single regional energy station Among 44 energy stations, Baiyun Tianzhou Station, the largest, has a heating area of 648,461 square meters and a heating capacity of 18,720 kW. 1.4 Unattended, automatic management Equipped with intelligent control system and Internet of Things technology, it can realize the automatic management effect of remote viewing, switching, and adjusting parameters on PC and mobile terminals. 1.5 Low operating costs and high energy-saving benefits As of 24:00 on March 15, 2020, the heating time is 4 months, and the heating season cost is about 13.23 yuan/m2, which is 51% less than the same period of gas boiler heating.

Secondly, The review of the process of plan setting, the historic project laid the foundation. The total building area in the heating area of Zhao City is 4.07 million square meters. The high-temperature steam generated by Limin Thermal Power Plant and Zhao city Thermal Power Plant was originally used as the heat source. Serious problems such as frequent car accidents and heating accidents are difficult to meet the growing heating demand in Zhao County. On October 26, 2018, Zhao city Zhongji Guoneng Heat Supply Co., Ltd. was established. Combined with the town development plan of Zhao city, it formulated clean energy heating solutions for Zhao  city, abandoning high energy consumption and high pollution such as traditional coal-fired boilers The heating mode, after operation and investigation in the heating season of 2018-2019, finally decided to use air source heat pump as a clean heating method. The heating terminal building area of the project is 4.07 million square meters, and the terminal form is radiator + floor heating.

Thirdly,44 regional energy stations were erected, and the branch pipeline network spread across the city. After the plan was finalized, the construction work followed up. According to the plan design, 44 heat source stations were rebuilt, including 36 residential heating stations.
3.1 The overall pipe network is a branched pipe network, which is arranged in a tree shape with simple layout, low capital investment and convenient operation and management.

3.2 There are two types of heating network laying methods: underground direct-buried and above-ground overhead, each accounting for 50%, without trench laying. 3.3 The heating radius of the pipe network is kept within 2 kilometers, most of which are within 1 kilometer. The heating radius refers to the length of the pipeline from the heat source to the furthest heat user. Generally, the heating radius of thermal power plants can reach more than 20 kilometers. The heat loss of long-distance transportation is extremely serious, and it will also bring a series of problems such as condensate recovery. 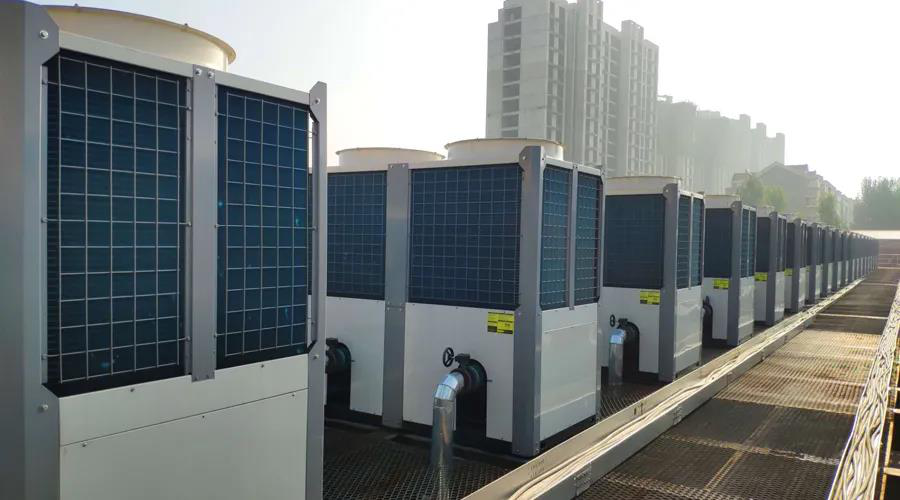 4.2 Series-parallel heating technology The project adopts the form of series-two-stage heating. According to the load changes in the heating season, it can also switch between the first and second modes. Fully match the actual situation of the pipe network and reduce system energy consumption.

4.3 Energy-saving control technology Intelligent modular control to achieve distribution on demand. When the terminal load changes, adjust the start percentage of the fleet to reduce the energy consumption of the fleet; at the same time, a single unit can automatically unload and load according to the change of the terminal load.

Fvie. The first victory, the heating fee was 13.23 yuan/m2, and the economic benefits were gratifying. The project was delivered and put into use in November 2019. After the smooth operation of the entire heating season, 73 heating areas corresponding to 36 heat source stations in the county A field survey was conducted, and 356 questionnaires were returned, all of which were valid answers. The questionnaire survey covered the whole county of Zhao City. Among all the investigated thermal users, most of the thermal users kept the room temperature at 18°C-22°C in their homes, which not only met the requirements of thermal users, but did not waste energy.

Six, Troubleshoot the problem of "flooding and leakage" in the heating system, and even a small number of users have incorrectly "stealed and leaked water". During the entire operation period, due to the old heating system, the problem was The dripping was serious, and the water supply volume reached 139,238 tons. Improvement measures: Check the entire heating system pipe network and the end before operation, and strengthen maintenance and management during operation.

Seven. The real user experience is more moving than the data. Random interviews with local residents, asking about the difference in air-source heat pump heating. The interviewed users expressed their support as soon as they opened the gate like a bamboo tube and pouring beans: "The central heating used in the past was unstable, sometimes it was too hot, sometimes it was not hot at all, and the use effect was unstable. Now the room temperature basically has no fluctuations. It’s very warm all year round; last winter, it was obvious that there were fewer foggy days, bluer skies, and less dust. The hotel near the station has nulite technicians on duty for a long time, and if you have any problems, you can handle them at any time As we locals know, we feel at ease."

Good products and technologies do not necessarily subvert people's lives. It is enough if the winter is warmer, the sky is bluer, and the heart is more stable. Air-source heat pump central heating in cities and towns has received unprecedented attention from the industry. Is the "Zhao City Model" considered a success? Can the successful experience be replicated? 8. The government and experts comment on the advanced nature and promote the "Outpost" to become a "bridgehead" month Previously, the "Distributed Central Heating Project of Air Source Heat Pumps in the Main Urban Area of Zhao County, Hebei Province" was held in Zhao City, Hebei Province! The expert review group established at the meeting learned about the background, technical indicators, operating conditions, economic and social benefits of the project, etc. The content, combined with on-site field inspections, and through inquiry and discussion, agreed that: This project is currently the largest domestic heating area demonstration project for air source heat pumps, and its comprehensive indicators have reached the domestic leading level.

If the creation of the "Zhao City Model" is an "outpost" for air source heat pumps to promote urban heating, then after a good heating season, after the unanimous approval of government staff and field experts, the "outpost" finally Steadily become a "bridgehead"